The publication of the first issue of Contemporary Literary and Cultural Studies was warmly received and highly appreciated by the experts in the field both in Iranian and in neighboring countries universities. A major part of this considerable appreciation originally goes back to the fact that Critical Literary Studies(formerly CLCS) is the first and, for the present time, the only academic English journal in the area of English literature and literary-cultural theory in the Iranian academic discourse. This characteristic feature appears to be more tangible when the number of the similar attempts throughout the whole region is relatively low. As I wrote in the editorial of the first issue, “if we review major developments in the area of English literature in what is generally referred to as the Iranian academic discourse in the past few decades, we will immediately find out that, to our big surprise, there has occurred no major attempt in publishing an academic English journal in this field of study nationwide.”

The CLS journal now widely enjoys an extensive popularity among the Iranian scholars of English literature and cultural studies; however, the major problem challenging this sort of journals is the surprisingly low number of the original papers submitted to the journal. Although we normally receive a relatively high number of papers widely distinguishable in their scope and domain, the number of appealing and noteworthy submissions is still low. The CLS journal, from the very first issue, has attempted, and shall be willing, to publish high-quality and original research contributions in the field of Literature and Literary Criticism and Theory.

On the other hand, the question of indexing of the academic journals has nowadays become a crucial feature for the development of both the journal and its contributors. The indexed journals, particularly when the journal is marked with an established IF (i.e. Impact Factor), plays a considerable role in the quality and quantity of the submitted papers. Although CLS is for the present time indexed in a number of national and international think tanks and database foundations, it is not indexed in the official Iranian Citation Centre yet. Our journal is now fortunately indexed in the MLA; however, our ultimate objective at this stage of the publication process is to amend and develop the CLS’ issues in order to be able to win a place both at the Iranian Ministry of Science, Research and Technology, and at ISC, that is Islamic World Science Citation Centre.

The close affiliation between Literature and the Human Sciences (including philosophy, theology, psychology, sociology, anthropology, etc.) has led to the emergence of a large number of researches in the academic discourse. Interdisciplinarity, as a widespread feature of literary theory and cultural studies, is not only a major matter of interest common to the scholars of all disciplines of the humanities, but also a categorical necessity in conducting original research. The wide popularity interdisciplinary research now enjoys is observed in the various approaches employed in literary and cultural criticism and theory. For example, Textual Approaches, Old and New Historicisms, Phenomenologies, Feminisms, Marxisms and Materialisms, Psychoanalysis, Post-Colonialism, and Deconstructivism are, first, subcategorized into several approaches and, secondly, marked with a conspicuous association with their corresponding academic disciplines. Literary and cultural criticism and theory thus include a perplexing field of research for the beginning scholar, which offer diverse and often opposing standpoints on a given literary and cultural text. Moreover, most of the critical approaches in the field have a long history of incongruity in that they have been evolving from different epistemological doctrines and standpoints. That is why the term ‘literary criticism and theory’ embodies heterogeneous premises.

The editorial board of the journal now includes new outstanding members who are considered as prolific academicians and versatile researches. Whereas the contributors of the first issue were mostly young researchers in the field, a couple of this issue’s researches have been conducted by renowned scholars in the area of the journal’s expertise. Besides papers by notable Iranian academicians, this issue of CLS includes researches from scholars in Tunisia, India, Iraq, and Tajikistan. Additionally, The CLS’s team of reviewers includes new members from different universities in Iran.

I would like to sincerely thank the academic members of the department of English in the University of Kurdistan. I should express my gratitude to the authorities of the Faculty of Language and Literature for their helpful suggestions concerning the further development of the journal. I also offer my sincere thanks to my colleagues in the Research Department of the UOK for their pragmatic advices. I also appreciate the friendly environment of the CLS office and, particularly, the invaluable attempts of the executive manager of the journal. I am also thankful to the administrative staff of the journal. The CLS team looks forward to reading original submitted manuscripts of the contributors. 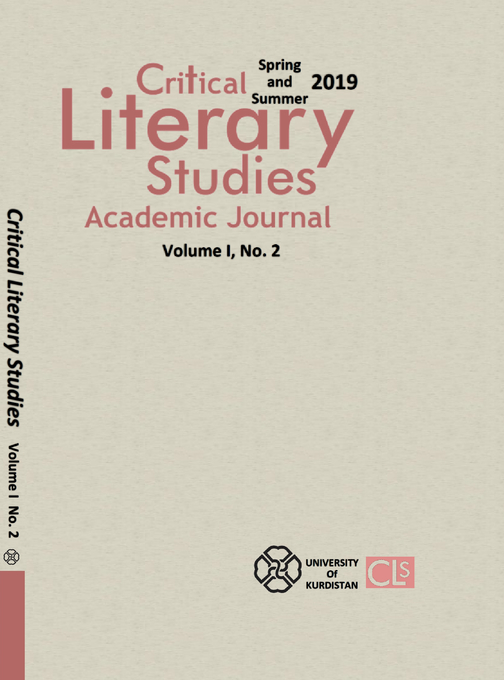